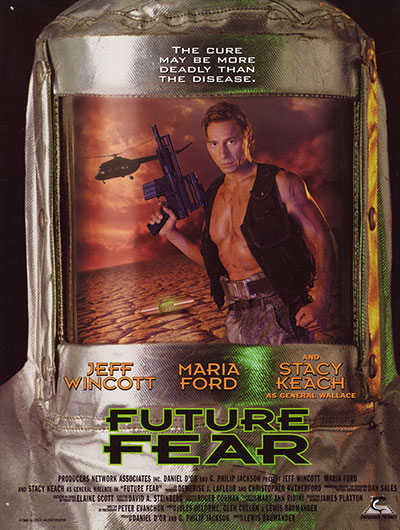 The cure may be more deadly than the disease.

Future Fear; a fast paced, high-tech, action motion picture starring Jeff Wincott(Last Man Standing, The Killing Man, Open Fire) as genetic scientist Dr. John Denniel. He and his military wife (Maria Ford, Dark Planet, Night Hunter) battle a race against time to find the cure to a flesh-eating virus that found it’s way to Earth on a probe from deep space. In less than a year much of the human population has become infected. The government declares Martial Law and the top military brass, along with some “specially chosen” personnel, move to sterile underground bunkers under the guidance of General Wallace (Stacy Keach, Escape From L.A., The Longriders, The Ninth Configuration, That Championship Season).

John and Anna discover a cure by combining human DNA with that of other species. But they need to use genetically manipulated fetuses from a human donor. With little time and few recruits to choose from, Anna volunteers her eggs for the project. The mixture is suspended in stasis with a small vial named The Ark. Unknown to John and Anna, their every move is under constant surveillance by General Wallace.

The end is near when John discovers that the bigoted General Wallace intentionally spread the virus as a form of genetic cleansing. In the meantime, through lies and deceit, Wallace sets husband and wife against one another. The stakes are high as the couple must overcome their mistrust of one another, protect the life form within The Ark and ultimately save mankind.