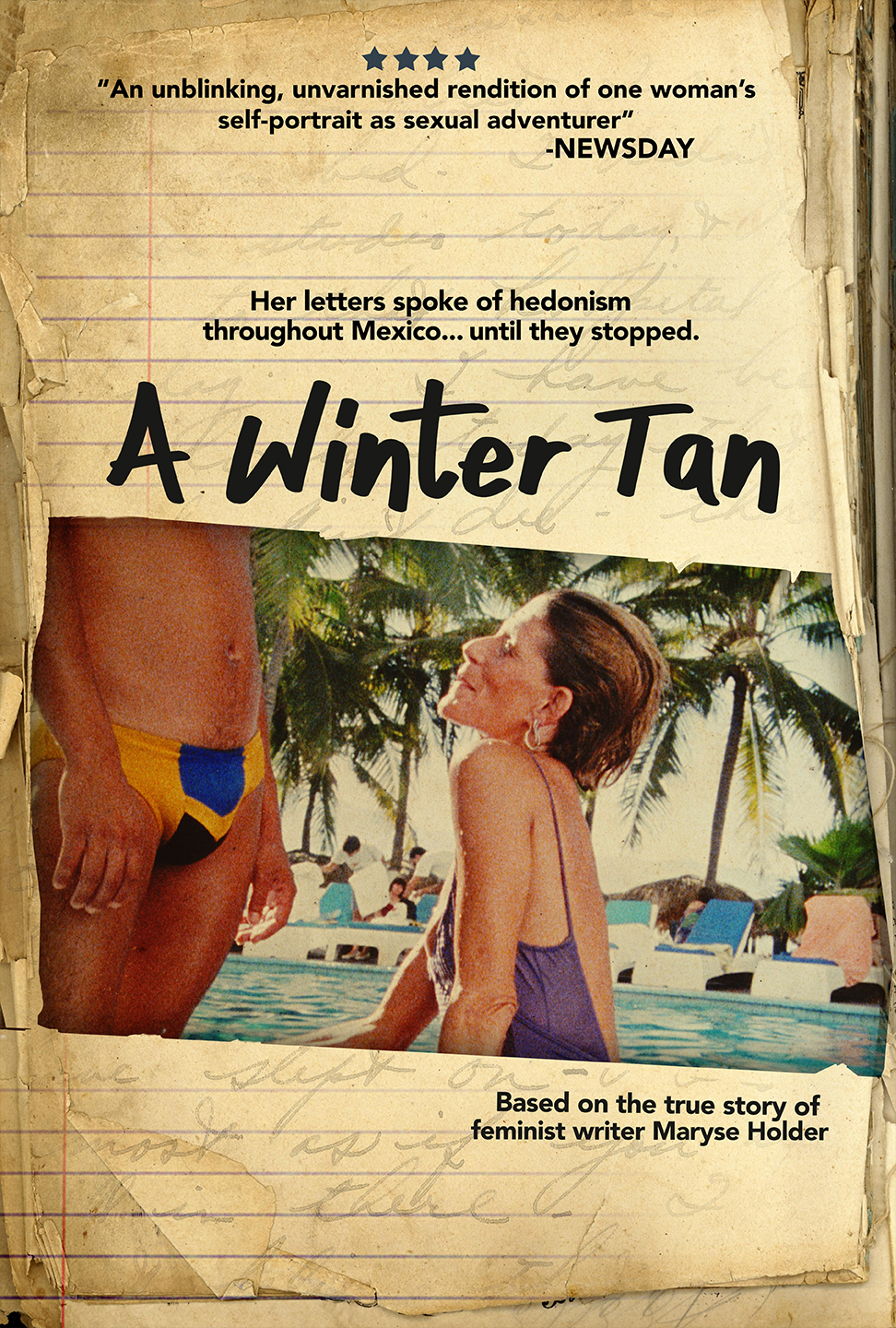 Genie Award: Best Performance by an Actress in a Leading Role — awarded to Jackie Burroughs

In 1987, It was a festivals’ favourite. The critics loved it; The critics hated it; And audiences argued about it.

Now, A Winter Tan is restored and in re-release to provoke a new generation – ‘Cause it was so much fun the first time around.

In A Winter Tan, Jackie Burroughs stars as an astutely fictionalized Maryse Holder, a teacher, an intellectual of her time and ultimately, ill-fated feminist author who met an untimely death in Acapulco. Maryse behaved toward Mexican men in ways some described as “mere subjects for the pursuit of sexual and romantic adventure”, others as racist, and others as equalizing, if not life-affirming.

The film has met with vigorous praise and visceral criticism from critics and viewers alike. No one who has seen it has been left feeling luke-warm emotion.

A Winter Tan was produced by a creative collective, who shared the credit Director. In this respect the listing is Alphabetical (by last names), not an order of importance. 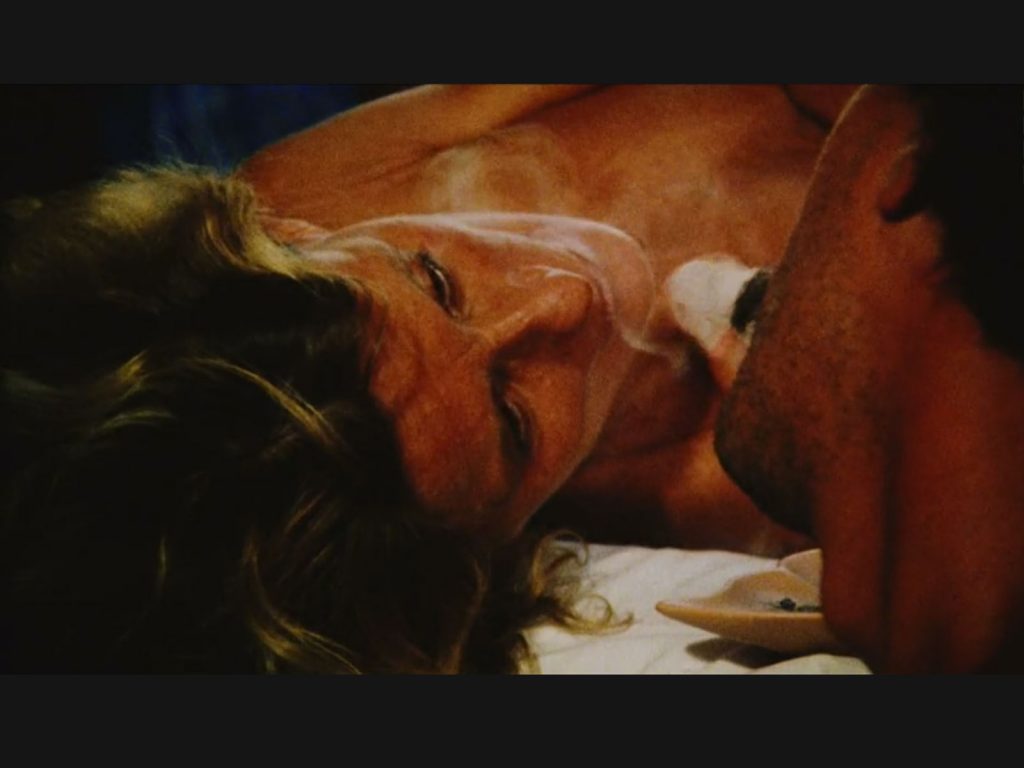 Jackie Burroughs was born February 2, 1939 in Lancashire, UK. She acted in live theater at Ontario’s Stratford Festival before she made her film debut appearance in The Ernie Game (1967). She went on to act in several other films which include The Grey Fox, a performance that earned her a Genie, and The Dead Zone. Jackie’s television credits include the roles of Amelia Evans in Anne of Green Gables (1985) and Hetty King in Avonlea (1990), a role that earned her three Geminis.

A Winter Tan (1988) a film in which Jackie co-produced, co-directed, co-wrote and starred in, she earned her third Genie, and critical acclaim. Jackie’s performance in Lost and Delirious again won great acclaim. Jackie died in Toronto at home, with close friends and family beside her on the afternoon of Wednesday, September 22, 2010. (Bio adapted from IMDb).

Louise Clark is president of Lark Productions. She has produced many groundbreaking features, including the Canadian drama A Winter Tan, and, while working for CTV, Clark developed and oversaw production on five seasons of the smash-hit comedy Corner Gas and three seasons of the critically acclaimed Robson Arms, as well as production on Flashpoint and The Listener. As Vice President of Program Development, she was responsible for all original development and production across Canada and worked directly with CTV specialties Bravo, The Comedy Network and Space. (Bio adapted from TIFF Open Vault site).

John Frizzell was a Canadian screenwriter, producer and showrunner. He began his career working in documentary films for TV-Ontario and later co-founded the production company, Rhombus Media Inc. He left Rhombus in the mid-eighties to pursue a career writing theatrical fiction. His credits include the television series Airwaves, The Rez, Twitch City, Angela Anaconda and Material World, and the films A Winter Tan, Getting Married in Buffalo Jump, Life with Billy, Dance Me Outside, On My Own and Lapse of Memory. He was the co-winner of a Writers Guild of Canada award for the feature Lucky Girl. John left us on April 3, 2016 leaving behind an esteemed body of work. (Bio adapted from TIFF Open Vault site).

John Walker is an award winning Canadian filmmaker. His many directing credits include the documentaries Utshimassits: Place of The Boss, The Hand of Stalin, Strand – Under The Dark Cloth, and Men of The Deeps, and the features A Winter Tan and Passage, which was produced for BBC and History Television.

His passionate commitment to the documentary form led him to co-found DOC, the Documentary Organization of Canada.

Aerlyn Weissman has worked as a writer-director on public affairs programming and documentary film. Since earning a Master’s degree in digital media and her work has also focused on geo-locative art, mapping projects/installations and using digital tools to explore the nature of movement and dance.

For the last three summers she has served as Director and mentor in the summer program at the Artsbridge Video Lab, a Boston-based organization that brings together Palestinian and Israeli students in facilitated dialogue and creative media projects.

Adapting, co-directing and starring in this screen version of Maryse Holder’s posthumously published Give Sorrow Words, Canadian stage and screen legend Jackie Burroughs gave one of the gutsiest performances in Canadian cinema history as an unabashed sexual adventuress who seeks to capture her carnal passions in prose. Determined to “wring a masterpiece out of her life,” Holder had undertaken a “sexual pilgrimage” to Mexico in the 1970s, living hard and indulging her libido unreservedly a la Henry Miller and Anais Nin – but her adventure had a tragic end when she was murdered at the age of thirty-six.

A full decade older than her real-life model, Burroughs brings a maturity and determination to Holder which helps the film avoid the pitfall of ascribing the heroine’s self-destructive behaviour to naivete or mental illness, as in sexist tripe like Looking for Mr. Goodbar; there’s something glorious about watching Burroughs’ Maryse refuse anything resembling prudence as she rebels against the roles forced on women after they turn forty.
~ Adapted from TIFF Open Vault site

In the mid-70’s, New York intellectual and schoolteacher Maryse Holder made two extended trips to Mexico in a self-conscious-and, as it happens, self-destructive-attempt to take “a vacation from feminism” and push her sexuality to the limit. Her adventures ended tragically when she was slain by a Mexico City pimp, but more than 1,000 pages of letters she’d written to friends were published posthumously in a book called Give Sorrow Words. It’s important to understand this backstory in order to appreciate writer/co-director/star Jackie Burroughs’ raw, fiercely committed 1987 film A Winter Tan, which doesn’t soften Holder’s abrasive personality or shy away from her sometimes painfully overwrought prose. As Burroughs, in a frenzied rush, recites passages from the letters directly to the camera, Holder’s conquests and humiliations take on a desperate fascination, as she becomes a living example of society’s prohibitive attitudes toward female sexuality.
~ Scott Tobias (AV Fest On-Line Review)